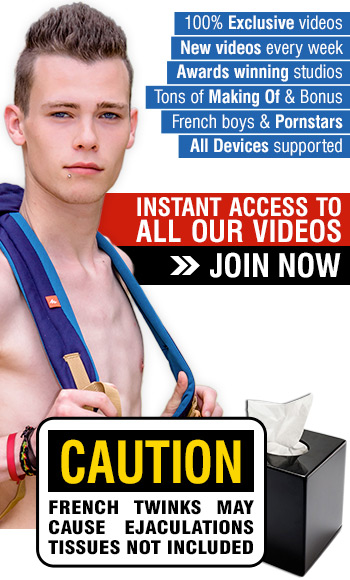 With "Californian Drift" French Twinks takes you once again to the USA to let you discover a story of hitchhiking as vicious as it is hot in which beautiful French twinks and American cars are the stars.

Paul Delay moved to California to live out a love story, but the American dream quickly turned into a nightmare. Paul finds himself alone and helpless on the edge of a long deserted road. Luck seems to smile when the handsome Justin Leroy driving a gleaming Corvette stops to hitchhike.

In exchange for services rendered, Paul readily accepts the sexual invitation from Justin who will brutally fuck him in the middle of the desert. The sun bangs as hard as the blows of cocks, the hot sperm floods the twink's face and he even accepts that Justin rinses him... by pissing on him!

As your parents have probably told you, you should always be wary of hitchhiking. Under the appearance of a good family boy, Justin behaves in fact like the last of the assholes, and leaves Paul naked, in the middle of nowhere covered with sperm, sweat and piss.

Antoine Lebel (French Twinks Producer)
Beautiful French Twinks and American Cars are the stars of this new three-part film “Made in the USA”. Find out how the American dream of Paul Delay will turn into a nightmare in this vicious and hot story. Our French Twinks achieved a real performance with this shooting outside which was relatively complex and I hope you will have as much fun watching this film as we had to make it!

, on the 2/13/2020
What more could you ask for...two of my favorite French actors together...better than that! Guaranteed fun